Home » COVID 19 weakens…and not from a vaccine

COVID 19 weakens…and not from a vaccine 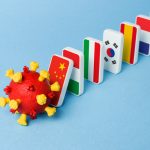 Updated information from Germany strongly suggests that the case fatality rate (CFR) is far lower than that which has been advertised and which many people have predicted.  It is critical to point out from this preliminary study that the case fatality rate turned out to be ~ .37%. By the American standards (Johns Hopkins) this area of Germany should have had a case fatality rate of 1.98%. In terms of the total population, the mortality is around .06%. This all stems from the “different reference sample sizes of infected individuals.”  In other words the denominator was far larger in terms of people who had either been currently suffering from the virus and were not sick enough to enter the healthcare system or who had already had it and in fact were now immune. This has not been factored into the “models” that have been promoted by states like Minnesota where the governor inexplicably continued to keep the state shut down for long periods of time despite emerging evidence that would not support this.  The suggestions from the Germans certainly include certain levels of sequestration particularly for vulnerable individuals and continuation of “hygienic standards”.  However, restoration of business under certain restrictions is certainly not only possible but likely recommended.  It is critical that “immunologic resilience” is promoted more rigorously and at higher levels. We have been talking about this here for three months.

And then we have the schools and the fear that reopening will fuel a viscious “2nd wave”.  But the data suggest otherwise:

The findings of our investigation are in line with other reports which suggest limited transmission of
SARS-CoV-2 in primary schools. These findings suggest that reopening of primary schools can be
considered carefully, with continuous monitoring of possible resurgence in infections and strategies to
limit transmission such as hand hygiene, physical distancing, respiratory etiquette and masks for older
children. (Arnaud Fontanet, Emerging Diseases Epidemiology Unit, Institut Pasteur, 25 rue du Docteur Roux, Paris 75015, France)

It needs to be mentioned that the expertise being supplied to the Minnesota governor’s office largely comes from the University of Minnesota’s “CIDRAP” — the Center for Infectious Disease Research and Policy — headed up by the renowned epidemiologist, Dr Michael Osterholm.  His Center is supported by Gilead — the drugmaker whose very expensive COVID 19 wonder drug, Remdesivir — was just tacitly “approved” by the FDA for the treatment of the disease.  It would seem that such financial connections between a major drugmaker — conveniently heavily invested in a new, fast-tracked and profitable product — and state-mandated policies should be more transparent.

But the biggest concern should be the lack of medical education delivered to the broader community. What can an individual citizen do other than huddle in their closet and worry about being an unwilling host to this bug? They can pay attention to their biological resilience partially spelled out in the previous blog on this website.   There are other interventions that the average citizen can now start to look at that will help them remain healthier in the face of an increasingly risky biological environment. I strongly recommend that motivated patients/citizens look at PEMF and PBM, 2 energy related modalities that can markedly change overall  “immunologic resilience”. These require medical consultation from individuals who understand these approaches. A good start is Dr. William Pawluk in New York who is an expert on PEMF.  Photobiomodulation (PBM) also has immunomodulatory effects and may improve overall resilience to community acquired infections. A good start is one of the commercial websites such as Joovv.   Dr. Michael Hamblin, a Harvard professor who is published widely on this intervention, is also an authoritative and reliable source of information.

Our clinic offers COVID-19 testing for both PCR (acute illness) and serologic testing (antibody studies for past infection and immunity) for those interested.  For those individuals who have been seen in our clinic, if you do not have our COVID-19 protocol that we feel improves “resilience” and that spells out steps to be taken in treating the illness, please let us know and we will send it to you by email.